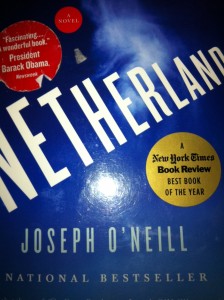 There’s this great passage in this great book by Joseph O’Neill. The main character, Hans, is thinking about a restaurant critic friend of his, who, he is beginning to realize, has a less-than-complete understanding of the things he writes about. It goes like this:

“As I repeatedly went forth with him and began to understand the ignorance and contradictions and language and difficulties with which he contended, and the doubtful sources of his information and the seemingly bottomless history and darkness out of which the dishes of New York emerge, the deeper grew my suspicion that his work finally consisted of minting or perpetuating and in any event circulating misconceptions about his subject and in this way adding to the endless perplexity of the world”

Like the rest of the novel, it’s pretty much perfectly written, but it also really struck me because I think all writers should do the opposite of adding perplexity to the world (wait for it…there it is…the earnestness eye roll). Of course, some subjects are really, really complicated and some are written about even as they are unfolding, which means facts can change. But a writer’s first and biggest responsibility is to understand what the heck she’s talking about before spewing it out onto a page, and passing it off as some version of the truth. That responsibility is even greater if you call yourself a journalist. (Which is why some news outlets, as well as some bloggers really, really, really, really bug me. But that’s a post for a different day.)

There are some journalists that are so great at understanding and explaining things. I love Gina Kolata and her ability to dissect and make fascinating complex health and science news. I love listening to Nina Totenberg on NPR as she eloquently dumbs down and makes relevant uber-complicated Supreme Court cases.

All that is to say, clarity is a worthy goal for us writers. So is writing a PEN/Faulkner award for fiction winner with an endorsement from President Obama on the cover. It is within my power to achieve at least one of those goals; but I won’t say which one.